Our Future is Better with Multiplexes 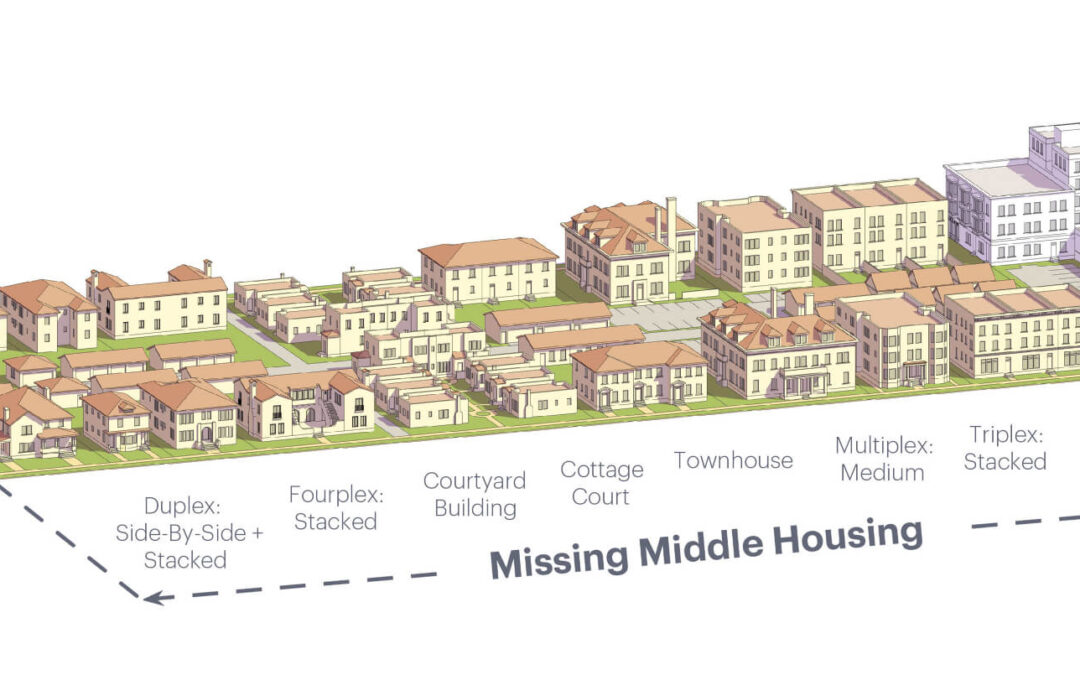 We’re excited to see a growing movement in Bay Area communities to remove restrictive zoning and re-enable multi-unit development — like multiplexes! — in our neighborhoods.  Towns across the Bay Area, from Berkeley to the Peninsula, are re-examining their zoning codes to consider allowing duplexes, triplexes, and quads to be built on existing lots that are currently limited to just one home.  In many cases, this allows neighborhoods to again build the kinds of multi-unit homes that are already there — blending right in!

Read on for more about how our suburbs started, how they’re going, and how returning to our roots (when plexes were plentiful!) will help us address our current crises.

Visit older sections of any major city, and notice how the homes were built in the early 20th century.  On first glance, it may be hard to tell that many of the buildings are actually multi-plexes!  These neighborhoods often have “stealthy density” already built in.  Many were built around old rail lines that have since been replaced by buses, and some of the homes have no parking at all.  Many of the older multi-unit buildings would also be illegal to build today under current zoning codes, which in many places only allow a maximum of one unit per lot. 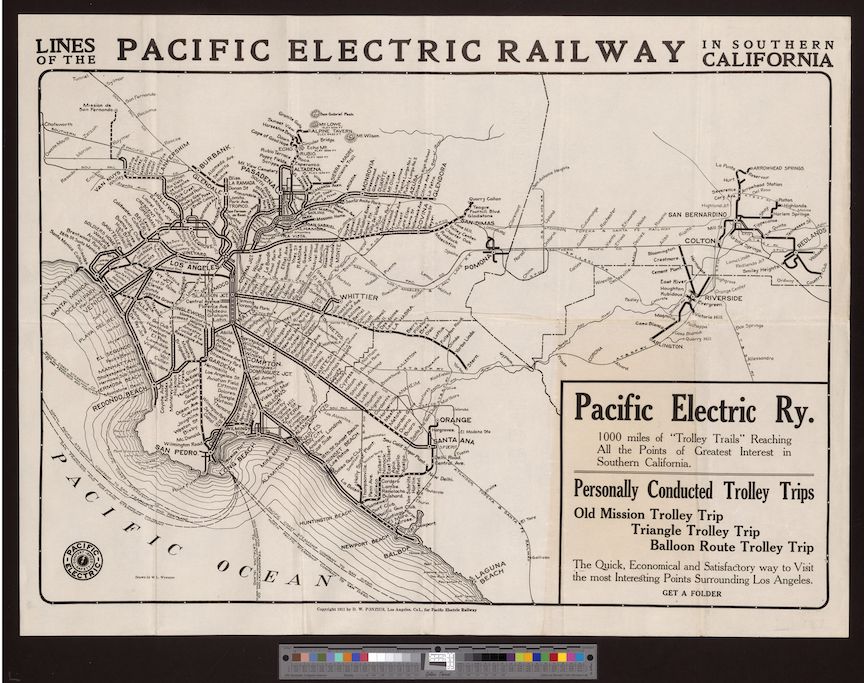 This old-school density is basically the way we as humans have lived since our earliest days; in proximity to each other, as a community, walking distance to what we needed.

Although single family-zoned neighborhoods are familiar to many adults alive today, their history is actually fairly brief.  They were recently enabled by America’s post-war automotive boom.  The 1950s brought us shiny, big new chrome cars, and big new subdivisions to go along with them, like Levittown.  The Peninsula saw an explosion of building in areas like Belmont, San Carlos, and others.

As the decades wore on post-1950, the suburbs continued to expand, and unsurprisingly, the average American family began to own an increasing number of cars: 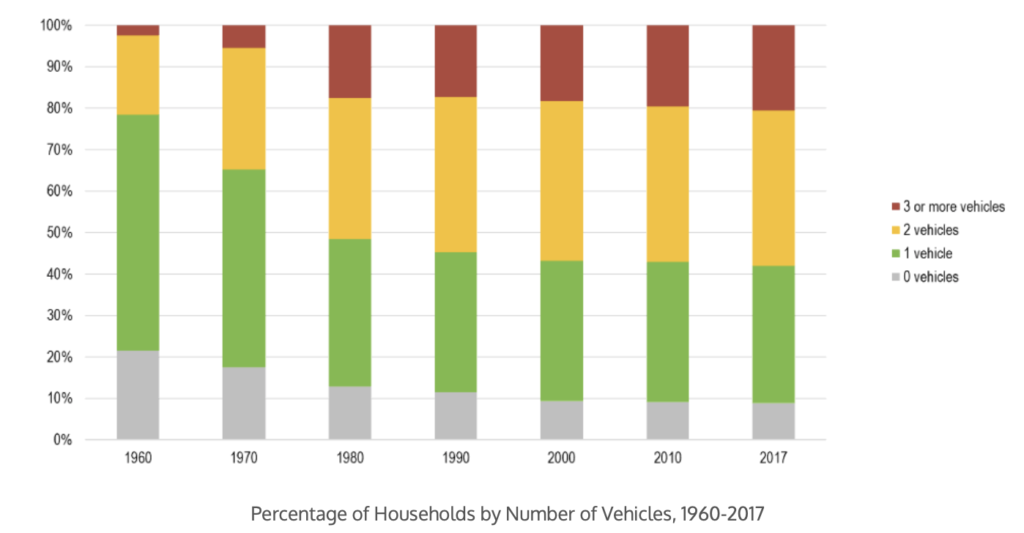 The railway lines above were replaced by highways and sprawl.  Southern California’s freeways began proliferating in the 1950s, following adoption of the 1947 Master Plan: 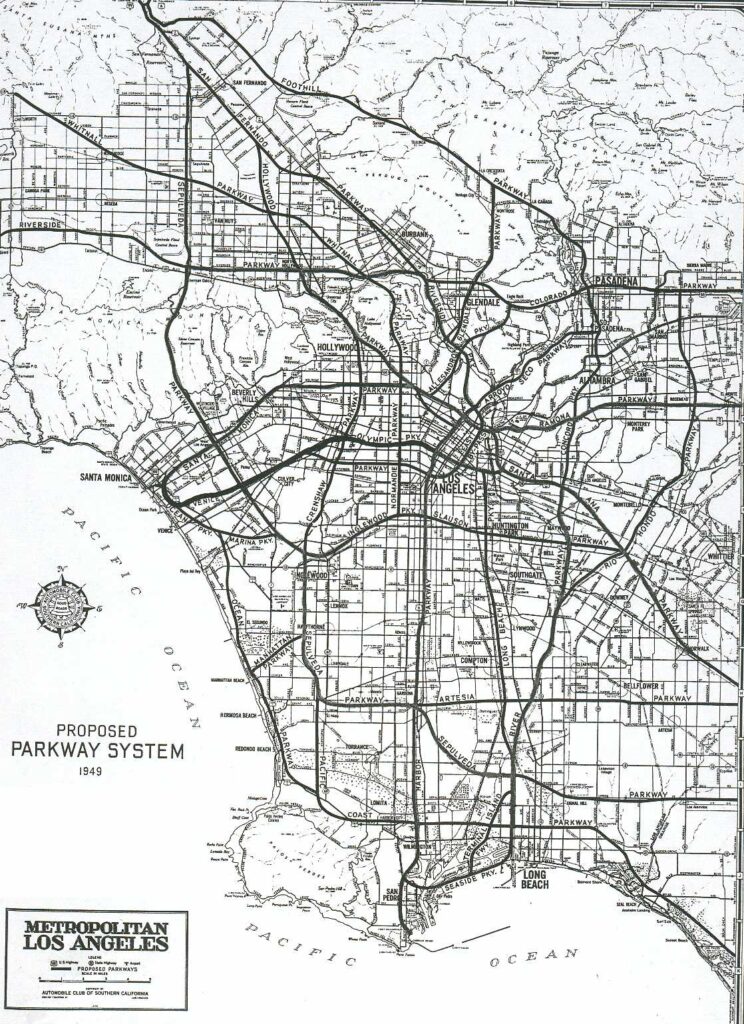 Today, suburban Californians often refer to distance in miles and freeway exits instead of blocks walked.  The proliferation of cars changed our entire frame of reference.

However, the golden age for our suburban developments was anything but for our climate.  Californians began to recognize the existence of smog caused by vehicle pollution in the 1940s. In 1967, California finally established the Air Resources Board and came to grips with the state’s severe, health-impacting smog problem due to vehicle pollution.

We are now left to grapple with the ramifications of decades of sprawl.

Our climate is warming steadily, and here in California, we’re often the first to experience the negative effects of climate change.  Subjectively, it feels like each year’s fire season is worse than the previous one.  In fact, “fire season” itself is becoming an outdated term, as fires now pop up all year long.

One of many solutions to getting this carbon and pollution-driven climate crisis under control is to stop building further and further out, and to instead build more “infill housing“, which means making better use of space in our existing neighborhoods.  One example would be putting a duplex or fourplex building where a one-unit home previously stood.  By creating additional homes in existing areas, infill housing reduces Vehicle Miles Traveled, since more workers can live closer to their jobs, thereby reducing pollution and traffic.  Having a critical mass of customers in a neighborhood makes it easier for local shops and restaurants to thrive, which can make it easier for some residents to meet their daily needs without having to get into a car.  And last but not least — bringing more housing options to existing towns also makes the towns more equitable.

Not everyone has been able to enjoy suburban prosperity

Progressive jurisdictions around the country are recognizing the harmful, racially-charged history of single family zoning and its impacts on communities of color.

New or enhanced single family zoning appeared in many communities after racial exclusion and redlining were struck down in courts during the 20th century.  Requiring large minimum lot sizes and setbacks served to segregate communities by class.  And because explicit segregation and discrimination existed for much of the 20th century, making housing expensive meant that only those with existing assets could secure it — in other words, white families. 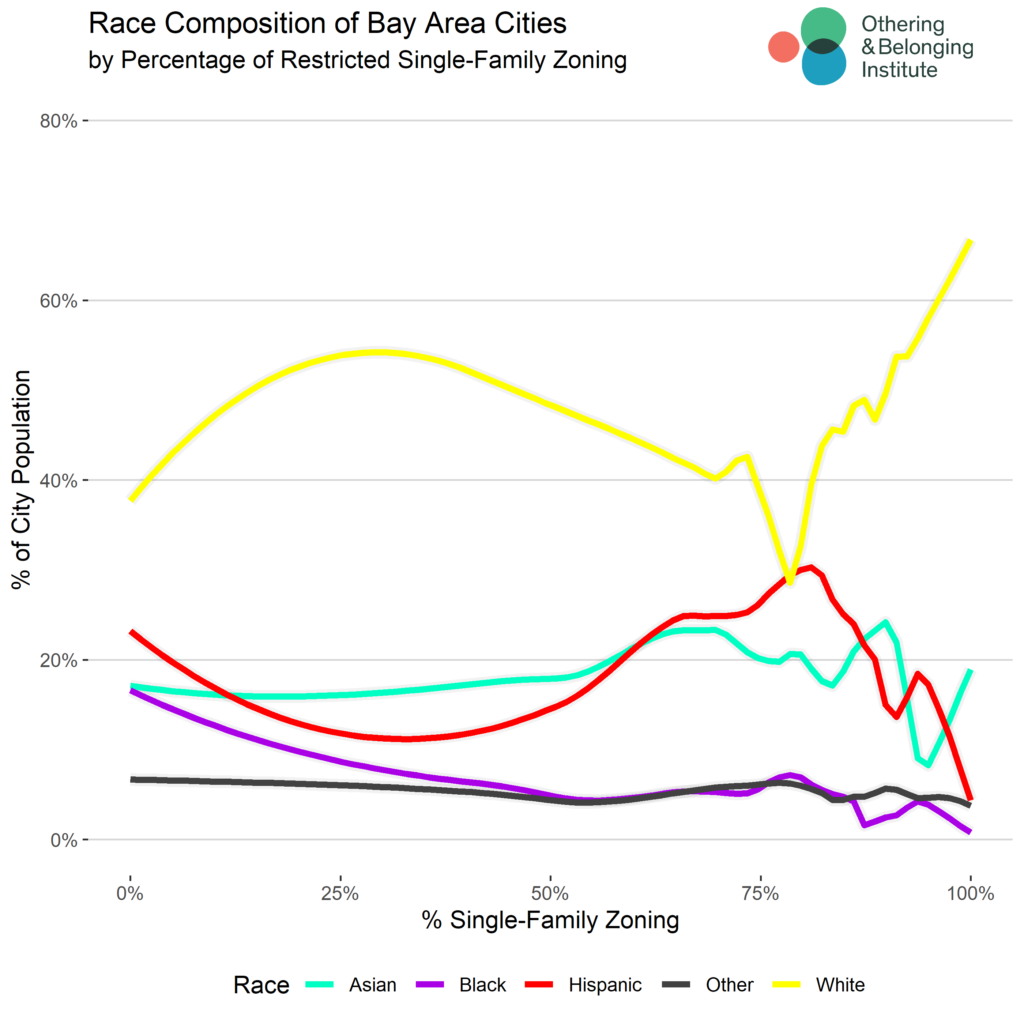 Additionally, the data make quite clear that single family zoning goes hand-in-hand with exclusion and wealth disparities, with the researchers finding that

“Schools in communities with lower levels of single-family zoning have twice as much of their population using free or reduced-price lunch (52 percent, compared to 26 percent in high single-family zoned cities).”

Opportunity is not distributed equally among communities here in the Bay Area.  When single family zoning is the law in a community with high demand for housing due to a decades-long lack of supply, extreme demand escalates the price of housing out of reach of all but the most affluent residents and well-paid workers — both for rentals and purchases.  Stable, reasonable housing costs are good for our communities since they allow households room to save and invest for the future, retirement, and education, and to better weather the shocks of daily life.  When those who work in a community can live there as well, enjoying the community’s benefits and a stable lifestyle, our cities become more complete and sustainable.

It’s time to return to the way we used to live; vibrant, fantastic, walkable, community-focused neighborhoods.  Infill development in the form of duplexes, triplexes, and more help us achieve just that.  These kinds of units are often known as “missing middle housing,” since the housing they would create would in many cases be homes for the middle class.

Those who prefer just one unit on their lot can live this way if they choose, albeit at great expense — the median detached single family home in San Mateo County now sells for over $1.9M.  Expanding zoning means that standalone single-family homes can still be built and sold, but also opens up new possibilities to allow 2, 3, or 4 units on a lot — which can sell for less per unit than a single family home would cost.

While some residents may prefer the luxury of single family homes and are welcome to continue doing so under expanded zoning, others may prefer to live in community with others to share maintenance and costs, or to enable intergenerational living — another “old” concept that’s more appealing than ever as Millennials, now well into their 30s, sort out how to work and care for children and their own parents at the same time.

What does our future look like with plexes?  They provide us with:

One great thing about opening up restrictive zoning is that it provides property owners with more choices what to do with their land, not fewer:

Below is a map showing the growth in “supercommuters” — those who commute more than 90 minutes each way — between 2009 and 2017: 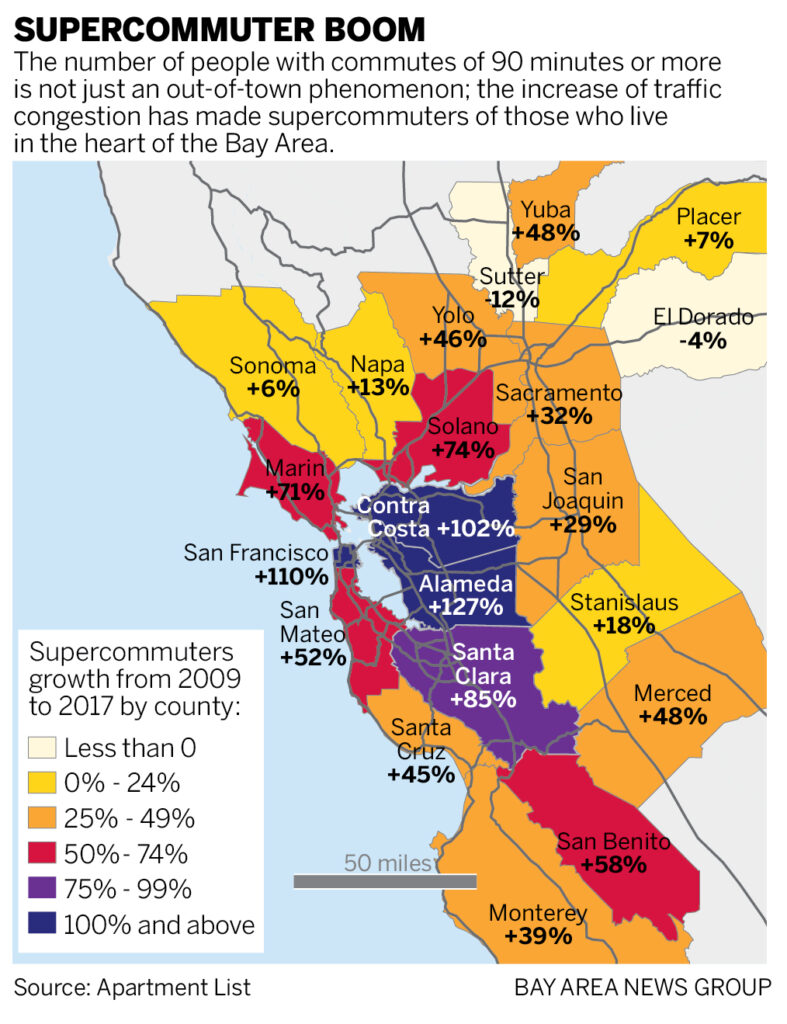 With so much Peninsula housing stock currently occupied by retirees (some of whom feel trapped in place by their Prop 13 property tax subsidies) and a severe lack of new building, those who actively participate in the workforce are forced further and further away.  This endangers quality of life for us all, even those who live on the Peninsula; our shops, services, and communities are understaffed and must pay more to incent staff to travel in from far away.  These longer travel times also cause traffic and pollution in our region due to the lack of public transit available to “supercommuters.”

Although a unit of housing — even affordable housing — can cost $1m to build here in California due to our byzantine, lengthy approvals process (see Firehouse Square in Belmont which took almost a decade to approve on a site that sat vacant for 20 years), moving to a “by right” approval model (where projects that comply with zoning are automatically approved) and allowing height/density increases will ease per-unit costs of construction, allowing these units to again become more attainable for typical Bay Area workers and families.

The current average rent for a 2-bedroom apartment in the town of San Mateo is $2,942, according to Zumper.  With minimum wages around $15 in most cities in the county, it would take about 50 hours of work per week, before taxes, to simply cover monthly rent.

Studies show that as new units of housing are added — even if those units are market rate — supply and demand works, with existing (older) housing stock becoming more affordable as a result.  More affordable homes mean that those who work here can live here, too.  Workers and families of all types, races, and lifestyles are a critical part of our complete communities.

When a city’s housing base is stale, so is its tax revenue, due to 1978’s passage of Proposition 13 which generally pegs homeowners’ assessed values to the price at which the home was purchased.

Because of Prop 13 subsidies (which apply to residential and commercial properties alike) and the lack of new development in our region, our state and local governments have simultaneously been forced to raise other forms of taxation and cut services (such as tuition-free college for in-state students and school buses for local schoolchildren).  Prop 13 was passed in 1978.  Cities in 2021 cannot run on 1970s-era revenue.

New housing brings not only the direct tax revenue created by the development itself, but also provides new residents who can support local businesses, improving the community for all.  Imagine what additional retail, services, and restaurants we could support here as ground floor retail in new developments if we had more residents to support these businesses.  Paris Mayor Anne Hidalgo has championed The 15 Minute City movement, focused on walkable communities similar to those that exist in many Parisian neighborhoods.  Imagine how well the European model could work in our existing downtowns and neighborhood enclaves, which today require residents to get in a car to meet their daily needs.

With economic, social, and equity benefits on the horizon, our future with plexes looks bright.  Infill development allows middle class residents — just like those who purchased homes here decades ago — to live in the communities where they work.  And as economically and racially diverse communities grow and thrive, existing homeowners’ land becomes more valuable as the possibilities for what can be built there expand.  Expanding zoning is a wonderful policy change that benefits all stakeholders in the community!

Evolving the zoning in our local communities is an ongoing process, and the more voices in support, the better.  Join us in raising awareness about the benefits of multiplexes in our communities: